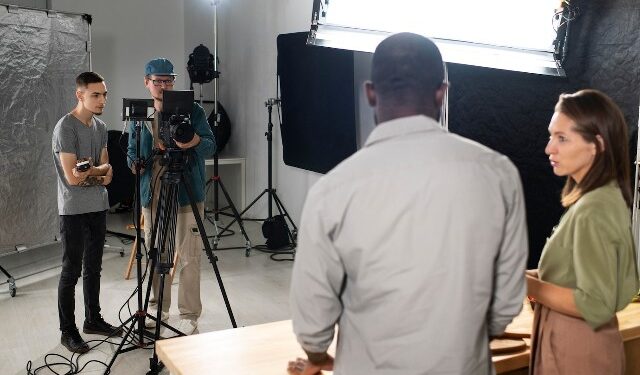 TV serials and films are the backbones of the media and entertainment industry. The popularity of TV shows and films led people to use telefilms or cinemas as an agent of communication, awareness, education and learning. According to the latest Statista report, the total number of TV users worldwide has climbed to 5.36 billion in 2021. The Advertising and Media Outlook suggests that global TV viewers will reach 5.68 billion by 2026.

Have you ever thought about people working behind the camera? What elements keep the audience’s eyes glued to the habit of watching films or shows? In this article, we will discuss film & Television Production and Post-Production that gives the final shape to film and TV shows.

Writing for films and writing for TV shows are almost similar but vary in duration. Scripts for TV shows are shorter in time compared to film scripts. If commercial breaks are included, writing scripts for a TV show takes around 30 minutes or 60 minutes. On the other hand, the duration of a feature film is approximately 90 minutes.

A feature film has a clear narrative structure, like a beginning, middle, and end. On the other end, the script of a telefilm is a part of a larger narrative. TV show scrips have numerous beginnings, middles, and ends divided between several episodes.

4. Scheduling of the project

Scheduling a production is no cakewalk. Many factors are involved in setting up a production schedule, such as the availability of actors, budgeting, location, etc. Producing a film generally takes months to a year. On the other hand, producing TV shows is relatively less time-consuming. It may take between four and eight days to shoot a single episode.

Production for TV shows and films varies. In film production, creative directors coordinate between the staff and producers. They also look after all aspects of the set-up. On the contrary, the showrunner, photography director, and lead writer are responsible for producing TV shows beside directors.